Published: 08 January 2016 11:18 PM – Updated: 08 January 2016 11:20 PM
While official U.S. reaction over Mexico’s recapture of drug lord Joaquin “El Chapo” Guzman was positive, some experts took a more muted view on Friday. Some hope he will be extradited to the U.S., where he could face justice for crimes he’s committed on both sides of the border.

Arturo Fontes, a former FBI agent who spent much of his 28 years with the agency tracking Guzman, called the arrest a “great day for both countries.” But he cautioned: “As long as he’s in Mexico, he remains a threat to the state and a threat to escape. He must be extradited to save Mexico further embarrassment and humiliation.” 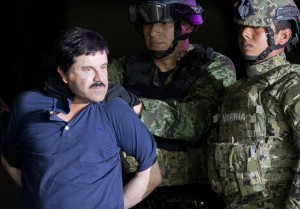 In the immediate aftermath of Guzman’s escape from prison last July, U.S. officials were frustrated with what they considered Mexico’s resistance to accepting help in the manhunt. After Mexico rebuffed an offer by U.S. officials to assist however possible, many analysts and officials on both sides of the border worried he would never be caught.

But Mexico did extradite several other kingpins to the U.S., suggesting a new spirit of cooperation in the drug war. Among those extradited was a U.S. citizen, Edgar Villarreal, a notorious figure known as “La Barbie,” as well as people charged with participating in the murders of a U.S. consulate worker and a U.S. immigration and customs agent.

“Look, there’s no doubt that this is a significant hit and in the wake of La Barbie’s plea may ultimately lead to much more of the kind of intelligence both countries need to continue going after these guys,” said former U.S. Ambassador Tony Garza. “But today I’d simply say it’s big news, and there’s justifiably good feelings in the air. But let’s just wait and see how the U.S. and Mexico leverage this thing.”

Said Andrew Selee at the Woodrow Wilson Center’s Mexico Institute: “We don’t know yet whether Mexico will extradite Chapo Guzman to the United States, but this certainly seems likely, given the challenges of holding him again in Mexico after he has escaped from prison twice. It’s an imperfect solution, but it may be the best option under the circumstances.”

Guzman faces indictments in numerous jurisdictions. The most recent case, filed in the Eastern District of New York in September 2014, accuses his criminal gang of smuggling 465 tons of cocaine into the U.S. between 1999 and 2014. It also accuses him of being the mastermind of 13 murders. Other indictments are pending in Texas, California, Florida, Illinois and New Hampshire.