Mexican marines were able to capture the kingpin of one of the most brutal drug cartels in Mexico, the Zetas, on Monday but experts are warning that the capture will do little to curb the violence that had terrified residents of Mexico’s border-states, according to the Associated Press. 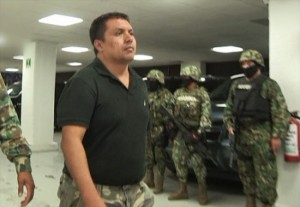 Miguel Angel Trevino Morales, often known as “Z-40,” was captured when he was stopped by Mexican authorities in both land vehicles and a helicopter. Authorities recovered $2 million in cash and nine guns with ample ammunition while arresting Morales along with a security guard and the cartel’s treasurer. No shots were fired in the surprisingly peaceful operation, according to the Dallas Morning News.

Former FBI agent Arturo Fontes spent much of his career tracking the cartel leader and told the Dallas Morning News that he had never thought that Morales would be captured alive.

“He had told his closest associates he’d rather be captured dead than alive,” Fontes said. “Mexico in general is breathing a sigh of relief today. I’m especially pleased for so many families, so many victims who may now be able to know what happened to their loved ones. Who killed them and why?”

While the Zetas are known for being extremely violent Fontes doesn’t expect the capture of Morales to cut down on the violence, at least not in the short term. Fontes told the Dallas Morning News that he believes that the arrest will create a bit of a power vacuum, especially in the territory surrounding the Laredo-Nuevo Laredo border, as rivals attempt to muscle out the now leaderless Zetas.

The Zetas are credited with being the first cartel to significantly branch out beyond just drug smuggling. The Zetas had their hand in kidnappings, extortion, smuggling contraband DVDs, intimidating local residents for protection, human trafficking, and, of course, running drugs, according to the Associated Press.

“History will show that Chapo Guzman [Joaquin ‘Chapo’ Guzman, leader of the Sinaloa cartel] was the bigger narco, but ’40’ was the villain, the enforcer and game changer, the one who changed the landscape for Mexico, introducing unimaginable violence to the country,” Fontes said. “This is a huge hit for the government.”

Former U.S. Ambassador Tony Garza told the Dallas Morning News that the capture of Morales will signal to the Zetas that the current Mexican government will no longer tolerate the cartels.

“This is a big hit, and you can’t underestimate the signal it sends to the Zetas, and to those within other organizations that have chosen to resort to what can only be called ‘narco-terrorism,'” Garza said. “I am certain there are many within the law enforcement community, both U.S. and Mexican, who are reflecting on their lost colleagues this evening and know that this was the man responsible for so much suffering. I think this administration is saying they mean business.”

A former member of Mexico’s intelligence, Alejandro Hope, told the Associated Press that the capture of Morales could help lead to the end of the cartel.

“It’s another link in the destruction of the Zetas as a coherent, identifiable organization,” Hope said. “There will still be people who call themselves Zetas, bands of individuals who maintain the same modus operandi. There will be fights over illegal networks.”

In a profession that demands a certain level of violent Morales was thought to be more violent than others. Speaking to the Associated Press on condition of anonymity due to the sensitive nature of the topic a U.S. official described that Morales often used a brutal form of execution when crossed. In a procedure that became nicknamed “el guiso,” which means “the stew,” a person would be placed in a 55 gallon oil drum and set on fire.