You’ve all heard the news by now I’m sure, 750 members of the Sinaloa Federation taken down by the U.S. Feds.

It’s been the talk of the border all day, but that’s not why you’re here, is it. Hell no. Let’s take a look at what the Feds are not saying. That is always so much more interesting. 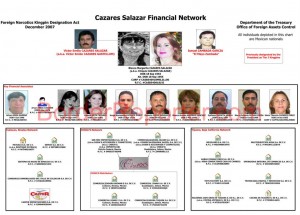 The investigation started because the Feds lost a guy by the name of Victor Emilio Cazarez Salazar. Cazarez is a top-level trafficker who controls Mexicali for the Sinaloans. He was indicted in 2007 and is a fugitive.

Cazares is the brother of The Empress, remember her? Sure you do; Blanca Margarita Cázares Salazar, La Emperatriz, money launderer for the Sinaloa Federation from the 1990s, when Amado Carrillo died, to now.

The Empress is an ex-girlfriend of Ismael “El Mayo” Zambada, lives in Culiacán, Sinaloa. Her son was murdered along with Joaquín “Shorty” Guzmán’s son in an attack in that city last spring.

Now you remember! At the time, people blamed Arturo Beltrán and the Leyvas for the killing, saying it sparked the current drug war, breaking the Sinaloa Federation and decimating Sinaloa and Sonora.

Then the rumors came out, and they’re still being heard, that it was El Mayo who went after Guzmán’s son.

I called Washington a little while ago but the Justice Department’s office says they’re not releasing the names of those arrested.

With a little help from un compá, we’re a little bit closer to unraveling this mess.

The Feds can’t spell, so when they filed the indictments against The Empress’s brother, they spelled his name Gastellum, don’t ask me why.

The indictment was filed and sealed by a U.S. District Court in California in February 2007.

Happily, it’s no longer sealed. Let’s see what it says.

In brief: del Castillo is Cazares’ son-in-law and negotiated multi-ton cocaine load shipments to the U.S.

Carlos Cuevas: Ran the show in Imperial County and was the Mexicali connection for the Sinaloans.

Santos Rocha: Was in charge of packing the cocaine in cars to get it past U.S. Customs at the ports. One of his best ideas seemed to be throwing down a row of sandbags in a cross-border canal and using that as a road to run loads across. I don’t know why the Feds never noticed a row of sandbags sitting in the water, but alright.

Miguel Cardenas and Jose Urquiza: Acted as the look-outs for the load vehicles.

Octavio Amezcua: Was in charge of the marijuana loads.

That fine newspaper, Zeta, uncovered a little more on Cazares last year, when reporters found that he was receiving federal welfare benefits from the Mexican government for three hundred head of cattle in Badiraguato, Sinaloa.

I’ll add more information as this case continues to unravel. I’m working on gathering some of those 755 names. Sále.