Patrolling the US-Mexico border as a Mexican-American

Patrolling the US-Mexico border as a Mexican-American

In wake of the terrorist attacks in Paris last week, protecting America’s borders once again dominates the headlines. 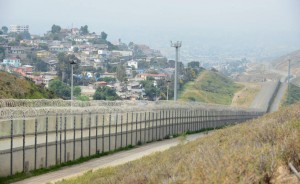 And in the run-up to the 2016 presidential election, immigration, too, is center stage. But protecting America’s border between the U.S. and Mexico isn’t a simple case of good versus bad.

For some, protecting the line where north meets south is complicated. Thousands of border agents are both Mexican and American.

Alfredo Corchado explores the political and emotional tug-of-war of these agents in a three-part series for New Yorker Magazine. It’s called “Faces from the Border.” He joined us to talk more about his piece.