MEXICO CITY — Hours after the world’s most infamous drug lord, Joaquín Guzmán Loera, escaped Mexico’s highest security prison over the weekend, the United States offered everything it has — marshals, drones, even a special task force — to help recapture him. 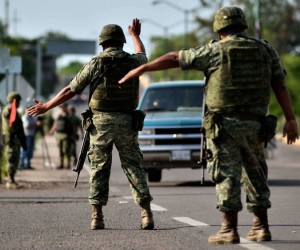 But the Mexicans have kept the Americans at bay, without giving an answer on the extra help, according to Mexican and American officials. They say the delay has confounded law enforcement agencies on both sides of the border and undermined efforts to find Mr. Guzmán, the billionaire head of the Sinaloa cartel known as El Chapo, before his wealth and global connections help him disappear.

“We can’t really understand why they are refusing to give an answer,” said one Mexican official, who works in the country’s security apparatus but was not authorized to speak publicly about his government’s deliberations. “We’re just on standby.”

Mexico’s interior secretary, Miguel Ángel Osorio Chong, said Monday night that the two countries were cooperating, just as Mexico worked closely with Guatemala to secure its southern border. But at a news conference about the search for Mr. Guzmán, who absconded through an elaborate tunnel dug 30 feet beneath his prison shower, Mr. Osorio Chong made clear that no additional American assistance should be expected.

“We are not going to do something new beyond what we have already been doing,” he said.

Mexican and American officials said the manhunt was being shaped by some of the same struggles over urgency, control and sovereignty that led Mexico to resist extraditing Mr. Guzmán to the United States after his arrest in a joint sting operation in early 2014.

The suspicions and concerns that have dogged the security relationship between the nations since the United States increased its involvement in Mexico’s drug war nearly a decade ago are now tarnishing what had been their most glorified arrest.

“It’s frustrating,” said Carl Pike, the assistant special agent in charge of the Drug Enforcement Administration’s Special Operations Division for the Americas until he retired in December. “It was a lot of work by a lot of really good people to put him in there, and then to just put him in a situation where he can climb in a tunnel and get away?”

Given Mr. Guzmán’s use of tunnels at the border and under safe houses, Mr. Pike added: “It’s kind of like a joke. ‘Gee, a tunnel, who would have thought.’ It’s kind of a no-brainer.”

Here in a country where Mr. Guzmán’s prison escape in 2001 is still legendary — by some accounts, he left in a laundry bin — breakout attempts were widely seen as inevitable. But Mexico and the United States have long maintained that Mexico is stronger and less vulnerable to cartel manipulation because of their shared responsibility for security.

Under Mexico’s last president, Felipe Calderón, American involvement in taking on the cartels increased tremendously, to the point that American surveillance drones flew deep into Mexico and manned American aircraft flew over the country to eavesdrop on suspects.

Since then, there have been many high-profile arrests, and American officials have often marveled at the trust that has developed in small groups — between D.E.A. officials and Mexican marines, or between lawyers and judges in Mexico and the United States.

But in recent years, especially after President Enrique Peña Nieto and his Institutional Revolutionary Party, or PRI, took over in 2012, the bitterness drawn from how Mexico and the United States interacted in the past have increasingly re-emerged.

Given their history of animosity, war and misunderstanding, both countries are skeptical of each other, said Adam Isacson, a senior associate at the Washington Office on Latin America.

“The Mexicans think we are domineering and imperialist, and we think they are corrupt,” Mr. Isacson said.

The Peña Nieto administration put the Americans at arm’s length upon taking office, questioning the right of American officials to give elite Mexican security officials polygraph tests to root out corruption.

For different wings of the American government, there were other early signs of disagreement.

The operational side of the American antidrug effort, led by the Department of Justice and the D.E.A., grew worried when the Peña Nieto administration centralized communication through the Interior Ministry, rather than letting law enforcement agencies in both countries work together on their own as they had under Mr. Calderón.

The “ventanilla única,” or one-stop shop, was meant to streamline cooperation, Mexican officials said. But it slowed down raids and projects as the new administration found itself overwhelmed with American input.

“What he didn’t realize was just how involved that the United States government really was in Mexico,” said Mr. Pike, the former D.E.A. agent, referring to Mr. Osorio Chong, the interior secretary. “It wasn’t just D.E.A. It was Customs, and D.O.D. and the State Department.”

American policy makers had their own doubts about the new administration. To many, the security operation looked too similar to the PRI of old, which ruled Mexico from 1929 to 2000.

“There was no systematic approach to address the problem they had on their hands,” one former American official said. “The big policy players were all focused on the economic agenda, and they weren’t focused on the security side. They had left it in the hands of traditional PRI guys, instead of modern PRI guys.”

Lists of top suspects flowed back and forth daily between D.E.A. officials and their Mexican counterparts. American drones, focused on human trafficking, continued to fly near the border.

“You have to look at the number of people getting arrested,” said Arturo Fontes, a retired F.B.I. agent who spent at least 10 years investigating Mr. Guzmán. “This is not happening without both countries cooperating together.”

But when 43 students disappeared after deadly clashes with Mexican police officers on Sept. 26 in the state of Guerrero — a place long afflicted by political, social and criminal upheaval — the problems with Mexico’s approach came into full view, many American officials said.

Instead of transparency and action, the Mexican government toggled between obfuscation and delay. It took four months for the government to conclude that the students were dead.

“When the 43 happened, we could see how flat-footed the Mexican government was, and it underscored the problem,” said the former senior American official, who requested anonymity to avoid angering former colleagues.

In some ways, the arrest of Mr. Guzmán was both a highlight proving that cooperation worked and an anomaly. Previous attempts to capture him had failed in part because of leaks and indecision at critical junctures.

By the time the chase for him began to make serious progress, with raids just missing him in his home state of Sinaloa (including another instance when he escaped through a tunnel beneath a bathroom), joint prosecutions between the United States and Mexico had slowed down.

Extraditions to the United States had dropped to 54 in 2013 from 115 in 2012, according to American government figures compiled by Justice in Mexico, a research project at the University of San Diego in California. The joint operations center in Mexico City, where officials from both countries are supposed to work together, often included no one from the Mexican government, or just a few people, with dozens of cubicles left empty in a tall glass tower.

Mr. Guzmán’s arrest — or rather, how it was described by Mexican officials — did not necessarily strengthen the relationship. Many American law enforcement officials said they were frustrated by Mexico’s attempt to credit every possible agency, from the army and navy to the federal police, while mentioning only in passing the American role in tracking him for years and ultimately capturing him.

American officials said they had made it clear to Mexico, repeatedly, that extraditing Mr. Guzmán was a priority, though they did not expect immediate compliance; it took nine years to extradite Alberto Benjamin Arellano-Félix, a suspected cartel leader, after his arrest in 2002.

Initially, the bigger priority was capturing more cartel members. The arrest of Mr. Guzmán, or any leader, usually prompts an explosion in communication by underlings as they try to reorganize. That chatter, picked up by American and Mexican intelligence agencies, often leads to meetings where new leaders gather, and can be arrested. With the Zetas, several arrests preceded and followed the capture of Mr. Treviño, who was known as Z40.

But while the Americans sought to move quickly after Mr. Guzmán was captured in an oceanfront hotel in Mazatlán — to “keep rolling,” as D.E.A. agents often say — Mexico reverted to its process of deliberation, American officials said.

Sometimes, the Americans would push for a raid that never happened, for reasons never explained, officials said. In other cases, suspects disappeared, sometimes after finding out they were on the government’s radar.

“Right off the bat, I can think of at least five times where we got close to someone and it just got screwed up,” Mr. Pike said. “As far as captures afterward, I can think of three.”

Many officials and experts now question how the United States and Mexico will move forward. Some argue that relations could improve, especially if the countries again combine forces to hunt down Mr. Guzmán and build on earlier efforts to strengthen the Mexican judicial system.

American officials have also hinted at progress in the search for another priority suspect, Rafael Caro Quintero. He was released unexpectedly in 2013 by a Mexican judge who ruled that he had been tried in the wrong court for the murder of Enrique Camarena, known as Kiki, a D.E.A. agent who was abducted, tortured and killed in 1985.

But in the widening circle of law enforcement agents who have tried to put Mr. Guzmán out of commission, there are concerns that the failure to hold the world’s most notorious trafficker will make every case that follows more difficult.

“This is going to take us back years now,” he said.