Read the original article where Art Fontes is cited here.

MEXICO CITY — Body parts strewn on highways, etched with the letter Z. Videotaped torture sessions uploaded onto YouTube. Victims placed in barrels and dissolved into a “stew” of violent death.

Since the Zetas emerged less than a decade ago as the brutal new figures in the storied history of organized crime here, Mexico has experienced some of its most shocking episodes of violence, and the bloodshed has seeped into other countries throughout the region. 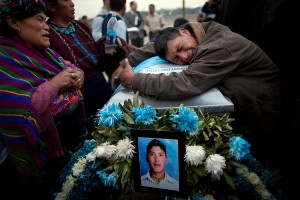 Founded by heavily armed former soldiers trained for war, the Zetas did not pioneer sensational acts of violence in Mexico, but they perfected the practice of carnage as message, as they expanded beyond drug trafficking into extortion, migrant smuggling, kidnapping and other crimes.

With the arrest on Monday of Miguel Ángel Treviño Morales, the Zeta crime boss so greatly feared that many would not dare utter his name in public, Mexico’s long and bloody drug war may have reached a crossroads. Nobody believes that drug trafficking will let up now that the Zetas have been weakened. And an array of ruthless gunmen in and out of the Zetas have no qualms about continuing to kill.

But Mr. Treviño’s arrest, the killing of the previous Zeta commander in October and the recent capture of several other lieutenants have rocked the trafficking organizations that did the most to damage Mexico’s image and instill the most fear among the people.

Mr. Treviño, who was better known as Z-40, after his radio call sign given by the militaristic group, was captured before dawn on Monday, with $2 million in his pickup truck, after spending time with his newborn child in a rural area near the Texas border. American authorities played a key behind-the-scenes role in his apprehension and, after his arrest, confirmed his identity through biometric and DNA tests, according to officials on both sides of the border, who were not authorized to speak publicly on the case.

The relatively quiet denouement of Mr. Treviño’s career belies the mayhem that made his organization stand out. In some ways, analysts said, the Zetas became a victim of perverse success.

The organization grew so fast, drew in so much money and hired so many gunmen quick to pull the trigger that it lost the loyalty that other Mexican crime syndicates engendered toward their leaders, while older, more established cartels sought to take down the Young Turks making business tough for everybody.

“They broke the rules of the game,” said George W. Grayson, a professor at the College of William and Mary and author of “The Executioner’s Men,” a history of the Zetas. “They wanted to brand themselves, and the brand they chose was the meanest, leanest, most sadistic organization in the Americas. Just mentioning Zetas sparks fear in the hearts of those who hear them.”

Where family and community ties bind larger cartels, the Zetas, increasingly run by young recruits trained in remote camps to kill in spectacular fashion, depended on a culture of military discipline and a hierarchy that began to fracture under the pressure exerted by Mexican and American law enforcement.

The danger remains that the splintering of the Zetas will leave smaller, dangerous gangs copying their name and tactics as they continue to extort, kidnap and deal drugs. State and local police forces are generally too corrupted, ill prepared or not committed to take them on.

But several analysts said the arrest of Mr. Treviño, led by Mexican marines but supported with intelligence from the United States — where he is wanted on drug and gun charges — could be the beginning of the end of the group as a large cartel and, possibly, the large-scale violence it carried out with such bravado.

“As a cohesive group there is probably not much left of them,” said Alejandro Hope, a former Mexican intelligence officer and now security consultant at a Mexico City research group. “But there will continue to be people who call themselves Zetas, act like Zetas and belong to gangs that use their letter.”

In this case, President Enrique Peña Nieto, who took office in December promising to reduce the violence, had made clear that Mr. Treviño, who faces organized crime, murder, drug trafficking and torture charges, was a prime target. But, after years of what it saw as too much American involvement in its security agencies, the Mexican government wanted its forces to lead the way.

A senior American law enforcement official posted along the border, who was not authorized to speak on the record, described a recent meeting with his counterparts in Mexico City. “What I got from that meeting is that Mexico wants to prove it can handle this fight on its own — or at least on its own terms,” the official said.

Still, the Mexicans recognized the need for American help, and the two governments began sharing information on Mr. Treviño several months ago, with the Americans passing along word of the birth of Mr. Treviño’s child a little more than a month ago, the official said. The Americans also shared the information that he appeared to be making trips to visit the baby in the Nuevo Laredo area, near where he was captured, the official said.

The authorities traded intelligence gleaned from conversations caught on wiretaps and informants’ tips that led Mexican authorities to Mr. Treviño’s truck, moving before dawn on a highway near the border, the official said. Mexican marines in a helicopter intercepted Mr. Treviño and arrested him and two aides without a shot. Eight guns and $2 million in cash were confiscated.

“The reason they caught him without layers of security and without firing a shot,” said Art Fontes, a former F.B.I. official who spent years tracking Mr. Treviño, “is because he had $2 million in the vehicle and he thought he could buy his way out.”

While rumors about Mr. Treviño’s capture — including a photograph of him in custody — began appearing on Twitter late Monday morning, American officials said they were not formally notified about the arrest until hours later.

Mexican officials have not acknowledged any American role in the operation. Mr. Peña Nieto, the president, congratulated the navy on Tuesday and celebrated the capture as efficient coordination among agencies — Mexican ones. “I send my recognition and congratulation to the Mexican Navy and all the institutions in charge of our nation’s public security for the efficient work they have done,” he said at an event in central Mexico.

The Zetas took in substantial sums by running the migrant smuggling business through Mexico but were also known for preying upon those seeking to reach the United States. Mr. Treviño played a role in the death or disappearance of at least 265 of them, including 72 immigrants, mostly from Central America, who were found dead in northeastern Mexico in 2010, Mexican authorities said after his arrest.

The Rev. Pedro Pantoja, a Catholic priest in Saltillo, Mexico, who has been working with migrants for 20 years, said he had just returned from Guatemala, where he saw gang members working with the Zetas collecting thousands of dollars from people looking to reach the United States. No matter who is in charge, he said, the system will remain in place as poverty and criminal logistics combine, often with violence used as a way to maintain control.

“Organized crime still has all the power, with migrants, with kidnappings and with violence,” he said. “It will continue.”

A version of this article appears in print on July 17, 2013, on page A8 of the New York edition with the headline: Capture of Crime Boss Ends Chapter for Mexico.