Over eggs at a San Antonio café, a reporter listens as former law enforcement officials and one ex-drug cartel operative swap theories about El Chapo’s latest escape and what it says about the U.S. and Mexico.

This story was co-published with The Atlantic and ProPublica. 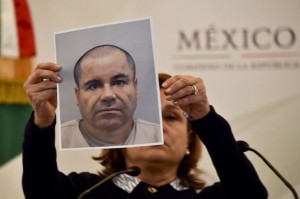 The slight man at the breakfast table seemed more like an evangelical minister than someone who once brokered deals between Mexican drug lords and state governors. He wore a meticulously pressed button-down, a gold watch, gold-rimmed glasses, and a gold cross around his neck. His dark brown hair was styled in a comb-over. And when his breakfast companions started to tuck into their bowls of oatmeal and plates of salmon benedict, he cleared his throat and asked for a moment of silence.

“Would you mind if I say grace?” he asked.

The gathering last week at Le Peep café in San Antonio would seem unusual almost anywhere except south Texas, where Mexico kind of blends into the United States — and so does the drug trade. Seated next to the cartel operative was a senior Mexican intelligence official. And next to him was a veteran American counternarcotics agent. They bowed their heads for prayer and then proceeded to talk a peculiar kind of shop.

A few days earlier, Mexico’s most powerful drug trafficker, Joaquin “El Chapo” Guzman, had escaped again from one of that country’s maximum-security prisons. No one in this deeply sourced group was surprised. Nor were they particularly interested in the logistical details of the escape, although they clearly didn’t believe the version they’d heard from the Mexican government.

They were convinced it was all a deal cut at some link in the system’s chain. Our breakfast minister even thought that Chapo had likely walked out the front door of the jail, and that the whole tunnel-and-motorcycle story had been staged to make the feat sound so ingenious that the government couldn’t have foreseen it, much less stopped it.

Such an outlandish notion may not be surprising to anyone who knows anything about Mexico. But as someone who lived there for 10 years, and reported on the country almost twice that long, what surprised me were the men’s theories on why anyone in the Mexican government would have been interested in such a deal. Perhaps, I wondered aloud, Chapo had possessed information that could have incriminated senior Mexican officials in the drug trade and, rather than try him, they had agreed to turn a blind eye to his escape?

The heads around the table shook back and forth. Chapo, they believed, had been thrown back into the drug world to — wait for it — restore order. Things have gotten that crazy.

“When I first heard the news, I thought this is either a good thing or a bad thing,” said the cartel operative. “Either this is a sign of how far things in Mexico are out of control. Or this shows that the government is willing to risk a certain amount of international embarrassment in order to restore peace for Mexican people.”

Surely I’d been out of Mexico too long, I told the table. How could anyone believe that Chapo’s escape would be good for public security?

They pointed to what’s been happening in his absence. The levels of drug violence in Mexico have begun to surge. An ascendant cartel, known as Jalisco Nueva Generacion (the New Generation Jalisco), has launched breathtaking attacks against security forces and public officials. Led by yet another ruthless killer named Nemesio “El Mencho” Oseguera Cervantes, the cartel has set up armed roadblocks to search cars driving into and out of some of the most important cities in central Mexico, in order to keep out its rivals. And when authorities have attempted to stop the organization’s members, they’ve fought back with some serious firepower. A spectacular rocket attack earlier this year downed a military helicopter, and a rampage against Mexican police left 15 officers dead in a day.

Chapo, my breakfast companions said, was forged in the early years of the drug war. He was old-school. And for all his lunacy and willingness to do whatever it took to build his empire, he had been a kind of mitigating force — killing when he was betrayed, but staying away as much as possible from attacks against the government as long as the government allowed his business to operate. If he were allowed to get back to business, the breakfast bunch said, he’d take care of El Mencho — most likely in a spate of violence that, while painful, would be quietly treated by Mexican authorities as a necessary evil. And whichever cartel leaders remained standing would be much weakened.

There was more than 75 years of combined experience in the trenches of the drug trade at the table. As for the ins and outs of the fight against it — now in its fourth failed decade — they knew as well as anyone that no cynicism is too great. And no deal too unimaginable.

“The real problem isn’t just the flow of drugs,” said the cartel operative. “It’s the fight against drugs, because everyone gets dirty in the fight.”

While the operative, who’d been neck deep in the drug trade for more than 30 years, went to the restroom, the rest of the table talked about how he was a living case history of what’s possible. He had landed in Texas first as a fugitive, then as an outlaw. Leaders of the Zetas cartel, who pioneered the beheadings that have become a common feature of Mexico’s gory drug war, had accused him of stealing millions of dollars. They had already killed his brother and displayed his body on a busy street near the U.S. border. When the operative arrived in the United States, he was arrested by U.S. federal agents on money-laundering charges. He was released as part of a plea deal after serving two and a half years in prison, and forfeiting — the veteran agent turned to me and mumbled the figure under his breath — some $5 million.

The Mexican intelligence official, a barrel-bellied man with droopy jowls and short, curly, salt-and-pepper hair, said south Texas was full of men like the reformed operative. He ought to know, because he’s brought a lot of them there. While his day job keeps him incredibly busy in Mexico, he’s kept his wife, ex-wife, and children in Texas, where it’s safer and where he makes a living secretly collaborating with Washington’s drug war. The U.S. government makes it a rule not to talk about such things, but it’s an arrangement that is not uncommon for Mexicans who have worked as high-value informants. The official has helped broker deals that have allowed numerous Mexican drug traffickers or corrupt elected officials to surrender to U.S. authorities for prosecution and/or cooperation. One of his most recent negotiations, he said, had taken place in Culiacan, the capital of Chapo’s home state of Sinaloa, and involved one of the cartel leader’s sons, Alfredo. I gave him a look of disbelief. In my years of covering the drug war, I’d seen numerous classified reports that described such meetings. But Chapo’s son? Seriously?

“You’re thinking too much like an honest person,” he told me. “The United States can make deals,” the official said. “In Mexico, there is no such thing, at least not officially.”

He shrugged off the criticism from U.S. officials and the nationalistic denials from Mexican officials following Chapo’s escape as just a lot of predictable posturing. To him, the battle lines in the drug war have never been as clear-cut as politicians claim. There are instead shifting alliances in which the U.S. government, like the Mexican government, finds itself fighting against a certain bad guy one day and alongside him the next. So when U.S. officials point fingers at their Mexican counterparts as if Washington has never cut a deal with a drug trafficker, the accusations seem as hollow to people in his line of work as the Mexican government’s insistence that Chapo acted without high-level help.

“There’s no real fight against drugs,” he said. “It’s all a perverse game of interests.”

The veteran American agent, with beefy arms and a 1980s-era, Erik Estrada haircut, chimed in. “A lot of people ask me, ‘Here you have a guy killing people, torturing people, and beheading people. How can you talk to a guy like that and take information from him?’ I talked to a priest about this. He told me to look for the lesser evil. And that’s what we do. We work with the lesser evil to get the larger evil.”

He ticked down the list of violent drug traffickers whom the United States has alternately treated as friend and foe, including Vicente Zambada, son of Chapo’s right-hand man Ismael “El Mayo” Zambada, who was detained by Mexican authorities in 2009 while walking into a Mexico City hotel for a meeting with two Drug Enforcement Administration agents. Zambada was extradited to Chicago, where his entire defense rests on an argument that he was working as an informant for the United States during the period covered in the indictment against him.

“I know that in order to get anything done in Mexico, I’m not going to be able to deal with altar boys,” the American agent said.

Still, a deal with Chapo strains credulity, even for those who know Mexico well. He has often been called the drug world’s equivalent of Osama bin Laden. To the chagrin of Mexico’s ruling class, he was listed by Forbes as one of the richest billionaires in the world, chief of a multinational trafficking organization known as the Sinaloa Cartel that he built after his previous escape from prison in 2001. Mexican authorities said Sinaloa was responsible for the majority of drugs flowing across the country’s border with the United States. The Chicago Crime Commission called Chapo, “public enemy number one,” a designation that had previously been given to Al Capone. And when the cocaine business began to boom in Europe and Asia, Chapo’s business boomed with it.

Sinaloa became the McDonald’s of the drug trade. Customers could find its products — cocaine, heroin, and methamphetamines — everywhere. Operations ran so smoothly that after Chapo’s arrest in February 2014, many experts predicted that they’d continue to hum along without him. However, hopes ran high in the United States and Mexico that Chapo’s arrest would herald a new era of trust between the two governments. The arrest was seen as a sign that Mexican President Enrique Pena Nieto was serious about ending a long history of government corruption, and that Washington, after some skepticism, could trust him.

Chapo’s latest spectacular escape seems to have put an end to any such illusions. “I think the relationship has been set back 10 years,” the American agent observed. He said he had received calls from colleagues across the United States who seemed disgusted with Mexican officials. “If we can’t trust them to keep Chapo in jail,” he wondered, “then how can we trust them on anything?”