CIUDAD JUÁREZ, Mexico — In this border city across from El Paso, Mexican soldiers discovered and dismantled a car bomb this week in a highly populated neighborhood.

The discovery came just days after the head of the Sinaloa cartel was captured in the state capital, Chihuahua City.

Across the central Texas border near Laredo, thugs last month shot at a helicopter, apparently mistaking its occupants for Mexican marines. The personnel were members of the U.S. Customs and Border Protection agency, and the helicopter took two bullets in U.S. airspace. In response, two Black Hawk helicopters now patrol the border in the Laredo region. To the south, in and around the industrial city of Monterrey, a recent killing surge left 25 people dead in one weekend. 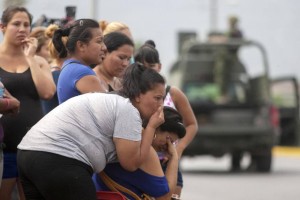 Three years into the administration of President Enrique Peña Nieto, Mexico’s security situation remains tenuous — a worrisome sign for analysts and some U.S. intelligence agents, who cite corruption that continues with impunity; limited cooperation between the two countries; and a rising homicide rate. May was the worst month for violence since since October 2013, they say, and 2015 appears on track to surpass the estimated 20,000 drug-related homicides in 2014.

The upsurge in homicides is taking place against a backdrop of what government authorities call the fragmentation of cartels, from some nine major organizations to more than 80 smaller but highly militaristic criminal groups. While the cells are weaker, they also represent a bigger menace for the general population, authorities say. The result is even more kidnappings, and extortion of everyone from university professors to pet owners, whose beloved dogs and cats have been snatched and held for ranson.

“Perhaps drug organizations no longer threaten the state, at least not the way they once did,” said Alejandro Hope, security expert and editor of the Mexico City-based eldailypost.com. “But they do threaten millions of Mexicans in a much more direct way.

“The old narco model is dead, that of the Santa Claus figure who generated jobs, infrastructure improvements and were seen as OK by local authorities as long as they all shared the profits and society was left alone,” Hope said. “These days, extortions, kidnappings are at epidemic proportions.”

Violence in some regions of Mexico is “the same or worse” than it was during the administration of President Felipe Calderón, Peña Nieto’s predecessor, said Oscar Hagelseib, assistant special agent in charge of the Homeland Security Investigation office in El Paso. Hagelseib pointed to intelligence reports from different states, particularly along the Texas border, that contradict the rosy scenario painted by a Mexican government eager to attract foreign investors.

The fight among cartels is for territorial control, Hagelseib said, but it is less about illicit drugs these days than it is about access to Mexico’s resources, particularly gasoline pipelines along the Texas-Tamaulipas border and beyond.

“They’re not just fighting over drug routes, or distribution points, but increasingly over Mexico’s natural resources,” said Arturo Fontes, a former U.S. federal agent and now a security consultant. “That’s been going for a while, but the situation is increasingly out of control.”

Mexico’s weak rule of law remains a fundamental factor in the violence. Of the 102,696 homicides that took place between December 2006 and November 2012 — 70 percent of them related to drug violence — only about 2 percent were investigated and led to a conviction, according to a recent United Nations report.

Peña Nieto’s strategy hasn’t veered much from that of Calderón, who in December 2006 called on the military to confront organized crime. Like Calderón, Peña Nieto has dealt a series of high-profile blows to the cartels, arresting a number of top leaders. In the past 18 months, security personnel have killed or captured senior leaders of the Knights Templar, Sinaloa, Zeta and Gulf cartels.

This approach, known as the “kingpin strategy,” has been privately questioned by some U.S officials. Corruption is so endemic, they say, that when new criminal cells break loose, they often end up in collusion with dirty law enforcement officials.

“The style, form, narrative is different from Calderón, but the outcome is the same,” said Luis Astorga, an expert on organized crime at Mexico’s National Autonomous University, or UNAM, and author of What Did You Want Me To Do? — an expression once used by Calderón. “The big difference is that under Peña Nieto, there is more control of information and less transparency for the public.”

“The bottom line in all of this,” said James Creechan, a sociologist in Toronto and author of the coming book Encyclopedia of Mexican Cartels, “is a vacuum of data useful for measuring the impact of the drug war.” The lack of information frustrates U.S. officials, who complain of a lack of intelligence-sharing with their Mexican counterparts.

“They want to keep us in the dark,” one senior U.S. official said.

The Mexican strategy remains military-driven. Daily, up to 45,000 Mexican soldiers patrol the streets, trying to restore security for residents in regions that many say are overrun by criminals. The military has come under heavy criticism from international human rights groups, most recently following a report by the Miguel Agustín Pro human rights center saying military documents show high-ranking officers ordered soldiers to kill criminals. The orders were issued just before an army slaying of several suspected cartel members who had surrendered. Seven soldiers were later charged in the killings, which took place in the municipality of Tlatlaya, west of Mexico City.

Meanwhile, the strategy has done little to reduce the violence. The government recently asserted, without offering enough proof to satisfy some experts, that the number of powerful cartels had been reduced to two organizations, Sinaloa and Jalisco New Generation. Last May the Jalisco group battled Mexican troops and police in brazen battles, including one in which 39 cities in the western state of Jalisco were shut down.

Astorga called the scenario of two cartels “wishful thinking,” saying it’s too early to discount the strength of other cartels and to brand the Jalisco cartel as the new evil, especially because its distribution mechanism in the the U.S. and its presence along the border remain unknown.

Other experts question Peña Nieto’s overall resolve, particularly in going after corrupt officials. Former governors of states bordering Texas — Coahuila and Tamaulipas — have been charged in U.S. federal courts with laundering millions of dollars by depositing dirty money in Texas banks, investing in real estate and hiring consulting firms to help their image. They remain at large.

“While Peña Nieto has been able to arrest numerous high-level drug traffickers via better coordination and intelligence-gathering, he has not addressed the underlying symptoms of the problem: an inept, corrupt and impoverished judicial system,” said Steven S. Dudley, co-director of InSight Crime, a think tank that investigates organized crime in the Americas.

Maureen Meyer, who heads the Mexico project at the Washington Office on Latin America, said: “It’s imperative that Mexico holds government officials accountable for corruption and wrongdoing. This would send a clear message that Mexico is serious about combating crime.”

In the incident this week in Ciudad Juárez, soldiers acting on a tip rushed to a 2000 red Volkswagen Beetle in a populated neighborhood known as San Isidro and found the explosives, the type used in mining and quarry operations. The explosives, which included ammonium nitrate, and could have destroyed buildings in a 40- to 50-yard-wide area, authorities said. Four people were being questioned.

A senior U.S. intelligence agent, speaking on the condition of anonymity, said the planned bombing was probably ordered by the Sinaloa cartel in retaliation for the arrest of a top leader in the state capital of Chihuahua City and in an effort to “heat up” the Juárez plaza. The term refers to efforts by cartels to shift the attention of law enforcement authorities to an area controlled by rivals.

“This war is far from over, no matter what the government says,” the U.S. investigator said. He said U.S. intelligence knows of clandestine graves in the area with hundreds of victims, including Americans, but they remain untouched by Mexican authorities.

José Luis Vázquez, a retired teacher and taxi driver in Ciudad Juárez, said he doesn’t want to believe the latest news of the cochebomba and instead blames the news media for trying to sell newspapers in a city with billboards that say: “I speak well of Chihuahua. Do you?”

“The truth is, I don’t know what to believe anymore,” he said. “The real question is why do we continue to elect these rats and tolerate this mess? When will we learn?”